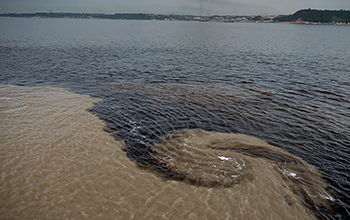 Small amounts of carbon are locked in rock

A new study by researchers at the Woods Hole Oceanographic Institution and Harvard University may help settle a long-standing question: how do small amounts of organic carbon become locked away in rock and sediment, preventing it from decomposing?

Knowing exactly how that process occurs could help explain why the mixture of gases in the atmosphere has remained stable for so long, says lead author Jordon Hemingway. A paper reporting new results was published in the journal Nature.

Atmospheric carbon dioxide, Hemingway notes, is an inorganic form of carbon. Plants, algae, and certain types of bacteria can pull CO2 out of the air and use it as a building block for sugars, proteins and other molecules in their bodies.

The process, which occurs during photosynthesis, transforms inorganic carbon into an organic form, while releasing oxygen into the atmosphere. The reverse occurs when those organisms die: microbes start to decompose, consuming oxygen and releasing CO2 back into the air.

One of the reasons Earth has remained habitable is that this chemical cycle is slightly imbalanced, Hemingway says. A small percentage of organic carbon is not broken down by microbes, but instead stays preserved underground for millions of years.

Based on existing evidence, researchers have developed two possible reasons why carbon is left behind. The first, called selective preservation, suggests that some molecules of organic carbon may be difficult for microorganisms to break down, so they remain untouched in sediment even after others have decomposed.

The second, called the mineral protection hypothesis, states that molecules of organic carbon may be forming strong chemical bonds with the minerals around them — so strong that bacteria aren’t able to pluck the carbon molecules away and “eat” them. The scientists found that this second reason is the most likely.