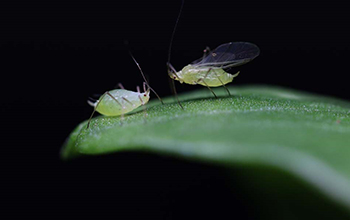 Many of an organism’s traits are influenced by cues from the environment. These features are known as phenotypically plastic traits, and are important in allowing the organism to cope with unpredictable environments.

But what are the genetic mechanisms underlying the traits?

In a new paper in the journal Current Biology, the researchers shed light on how these traits evolved and address important questions about the evolution of environmentally sensitive traits.

Pea aphids are insects that reproduce rapidly and typically give birth to offspring that don’t have wings. As many gardeners know, aphids can quickly overwhelm and kill the host plants on which they live and feed. When an environment becomes too crowded with other aphids, females produce offspring with wings, rather than wingless offspring. The winged offspring can then fly to and colonize new, less crowded plants.

“Aphids have been doing this trick for millions of years,” Brisson says. “But some aphids are more sensitive to crowding than others. Figuring out why is key to understanding how this textbook example of phenotypic plasticity works.”

The researchers used techniques from evolutionary genetics and molecular biology to identify genes that determine the degree to which aphids respond to crowding. Surprisingly, the genes they uncovered are from a virus that causes its host to produce offspring with wings. Researchers believe the virus does this to facilitate its own dispersal.

The research was funded by NSF’s Division of Integrative Organismal Systems.