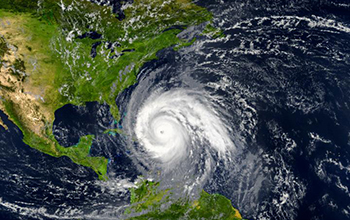 Timing of hurricanes affects the spread of mosquito-borne infectious diseases

The timing of a hurricane is one of the primary factors influencing its impact on the spread of mosquito-borne infectious diseases such as West Nile Virus, dengue, chikungunya and Zika, according to an NSF-supported study led by Georgia State University.

Researchers from Georgia State and Arizona State University developed a mathematical model to study the impact of heavy rainfall events such as hurricanes on the transmission of vector-borne infectious diseases in temperate areas of the world, including the southern coastal U.S.

In the aftermath of this type of extreme weather event, the mosquito population often booms in the presence of stagnant water. At the same time, the breakdown of public and private health infrastructure can put people at increased risk of infection. The study, published in Philosophical Transactions of the Royal Society B, found that the risk of disease outbreak is highest if the heavy rainfall event occurs early in the transmission season, the period when mosquitos can pass the virus to humans.

The research was supported through awards that seek to enhance the use of Big Data for complex systems like epidemic preparedness, for data-enabled systems for disaster response, and for facilitating international collaboration among researchers.