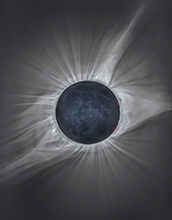 The total solar eclipse of August 2017 offered scientists the chance to study a variety of celestial and earthly phenomena, from learning more about the Sun’s corona to the behavior of animals and plants.

University of Wyoming botanist Daniel Beverly used the eclipse to look at the impact of the moon’s shadow on an iconic plant species of the Intermountain West: big sagebrush. He found that the short period of darkness caused a significant reduction in photosynthesis and transpiration in the desert shrub, but not quite to the levels of nighttime.

However, the plant’s circadian rhythm — the response to an internal clock common to nearly all organisms, including humans — was interrupted by the sudden changes in sunlight.

“The reduced temperature and lack of sunshine shocked the circadian clock of big sagebrush, triggering a response far beyond what happens when clouds block sunlight,” says Beverly, whose research was published in the journal Scientific Reports. “However, the duration of eclipse totality was not sufficient to bring the plants completely to their nighttime state.”

The research was supported through an award made by NSF’s Established Program to Stimulate Competitive Research (EPSCoR), which established the Wyoming Center for Environmental Hydrology and Geophysics. The center focuses on understanding the mechanisms by which water is transformed from precipitation into river flow, groundwater recharge, or soil moisture.