Tropical soil disturbance could be hidden source of carbon dioxide 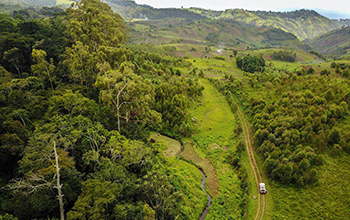 Thousand-year-old tropical soils unearthed by accelerating deforestation and agricultural land use could be unleashing carbon dioxide into the atmosphere, according to a new study by NSF-funded researchers at Florida State University.

In an investigation of 19 sites in the eastern Democratic Republic of the Congo, scientists discovered that heavily deforested areas leach organic carbon that is significantly older and more biodegradable than the organic carbon leached from densely forested regions.

Released from deeper soil horizons and leached by rain into waterways, the older, chemically unstable organic carbon is eventually consumed by stream-dwelling microbes, which devour the rich compounds and respire carbon dioxide back into the atmosphere. It’s a process that could jeopardize local ecosystems and further fuel the greenhouse effect, the researchers said.

“In many ways, this is similar to what happened in the Mississippi River Basin 100 years ago, and in the Amazon more recently,” said study author Rob Spencer of FSU’s Department of Earth, Ocean and Atmospheric Science. “The Congo is now facing conversion of pristine lands for agriculture. We want to know what that could mean for the carbon cycle.”

The scientists said their findings, published in the journal Nature Geoscience, suggest there is an additional pathway for leakage of carbon into rivers from soils churned by deforestation and land conversion.

“Understanding the carbon cycle involves research across the terrestrial-aquatic-ocean continuum, which this study shows is intimately connected,” said Hedy Edmonds, a program director in NSF’s Division of Ocean Sciences, which funded the research.