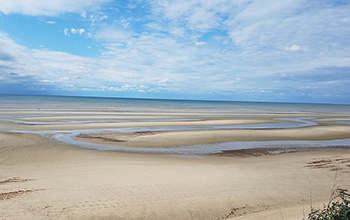 A new study by NSF-funded scientists at the Woods Hole Oceanographic Institution clarifies the influence of major currents in the North Atlantic Ocean on sea level along the coast of the northeastern United States.

The results, published in the American Geophysical Union journal Geophysical Research Letters, consider the strength of the Atlantic Meridional Overturning Circulation — a conveyor belt of currents that moves warmer waters north and cooler waters south in the Atlantic — and historical records of sea level in coastal New England.

“Scientists had previously noticed that if the AMOC is stronger in a given season or year, sea levels in the northeast U.S. go down, but if the AMOC weakens, average sea levels rise considerably,” says Chris Piecuch, a physical oceanographer at WHOI and lead author of the paper. “A half-foot of sea level rise, held for months, can have serious coastal impacts. It’s been unclear whether those two things—coastal sea level and the AMOC—are linked by cause and effect.”

Although the study confirmed that AMOC intensity and sea level seem to change at the same time, it found that neither directly causes changes in the behavior of the other. According to Piecuch, a study like this was not possible until recently. In 2004, an international team of scientists began maintaining a chain of instruments that stretch across the Atlantic. The instruments, which are collectively called the RAPID array, hold sensors that measure currents, salinity, and temperature.

“This study looked at variability in water sloshing around the Atlantic Basin, which is limited to several inches, whereas the melting of glaciers could add many feet of new water,” said Mete Uz, a program director in NSF’s Division of Ocean Sciences, which funded the research. “Still it is very important to understand this signal. Melting will happen over many years, during which we will constantly be watching for signs of acceleration or slow down. Understanding what drives local sea level variability will help us avoid misinterpreting limited observations.”