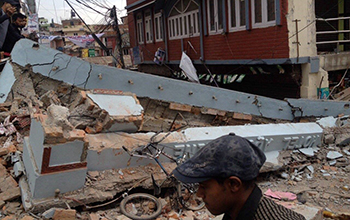 The Himalaya Mountains are a geological wonder, drawing adventurers and religious devotees from near and far to the world’s highest peaks. The mountains were created over a fault where the large tectonic plates of India and Eurasia collide.

But the same fault that holds the piercing summits of the Himalayas produces large earthquakes that can cause immense loss of life in the densely populated plains of northern India and southern Nepal.

On April 25, 2015, the magnitude 7.8 Gorkha earthquake struck near Kathmandu in central Nepal, killing about 9,000 people and injuring thousands. It damaged or destroyed more than 600,000 buildings in the area. Its initial shock, and magnitude 7.3 aftershock, were felt throughout the region.

Scientists’ understanding of the Main Himalayan Thrust fault, where the Indian Plate has pushed under the Eurasian Plate along the Himalayas, has been largely based on historical records of earthquakes that occurred before the advent of modern seismometers.

The 2015 Gorkha earthquake offered researchers an opportunity for an update. Seismic data from the quake showed that rupture started, then stopped, at two places where the rock types change adjacent to the fault. Results of the research, led by an international team of scientists and co-authored by Simon Klemperer of Stanford University and Marianne Karplus of the University of Texas El Paso, appear in the journal Science Advances.

The information offers clues about where, why and how earthquakes occur. Researchers now want to image the entire 1,500-mile length of the Himalayan front, where the tectonic plates overlap, to determine the shape of the Main Himalayan Thrust and the factors that control the maximum rupture in different parts of this convergent zone.