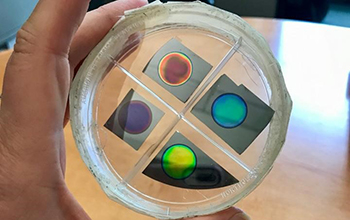 Add the fluid you want to test, take a picture with your smart phone, and a special app lets you know if there’s a problem.

That’s what electrical engineer Sharon Weiss developed in her lab at Vanderbilt University, combining research on low-cost, nanostructured thin films with devices many American adults already own. “The novelty lies in the simplicity of the basic idea, and the only costly component is the smart phone,” Weiss said. “With nanoscale porous silicon, we’ve created holes that are a thousand times smaller than your hair.” When pre-treated with the appropriate coating, the surface selectively captures molecules, darkening the silicon, which the app detects.

Similar technology being developed relies on expensive hardware that complements the smart phone. Instead, Weiss’ system uses the phone’s flash as a light source. Her team plans to develop an app that can handle all data processing necessary to confirm results.

In the future, the device could replace a mass spectrometry system that costs thousands of dollars.

Their results will appear in a future edition of Analyst, a Royal Society of Chemistry journal. An early version is online here.