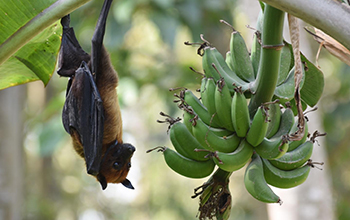 Since its discovery in 1999, Nipah virus has been reported almost yearly in Southeast Asia, with Bangladesh and India the hardest hit. In a new study, published in PLOS Neglected Tropical Diseases, scientists used machine learning to identify bat species with the potential to host Nipah virus, with a focus on India — the site of a 2018 outbreak. Four new bat species were flagged as surveillance priorities.

Barbara Han, a disease ecologist at the Cary Institute of Ecosystem Studies and co-lead author of the paper says, “while there is a growing understanding that bats play a role in the transmission of Nipah virus in Southeast Asia, less is known about which species pose the most risk. Our goal is to help pinpoint additional species with a high likelihood of carrying Nipah, to target surveillance and protect public health.”

Raina Plowright, a disease ecologist at Montana State University and co-lead author says, “As this paper was going to press, another case of Nipah virus was confirmed in Kerala. The public health community has again been forced into reactive mode. Our study is a starting point for the research needed to contain Nipah at its source, so we are managing spillover risk, instead of human suffering.”

Nipah virus is a lethal henipavirus that can be transmitted to people from infected bats. Eating fruit or drinking date palm sap contaminated by the bats is a noted transmission pathway. Once infected, people can spread the virus directly to other people, sparking an outbreak. Domestic pigs are also hosts that can infect people. There is no vaccine and the virus has a high mortality rate.

The research was funded by NSF’s Dynamics of Coupled Natural and Human Systems program. “Because of basic research in virus-host associations, we can now identify possible disease-carrying species much faster and more easily, as in this study,” says Sam Scheiner, an environmental biology program director at NSF. “The result is much better surveillance and control of diseases.”