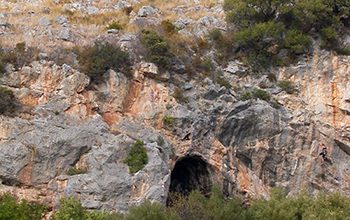 Two caves — the Grotta del Fossellone and Grotta di Sant’Agostino — near the beaches of what is now Italy’s west coast are producing some of the earliest evidence of ancient humans using adhesive on their stone tools, an important technological advance called “hafting.”

The caves were once home to Neanderthals who lived in Europe during the Middle Paleolithic period.

In a study published in PLOS ONE, an international team of researchers that included the University of Colorado Boulder’s Paola Villa, corresponding author of the study and an adjoint curator at the university’s Museum of Natural History, reports findings that Neanderthals living in Europe from about 55 to 40 thousand years ago traveled away from their caves to collect resin from pine trees, which they used to glue stone tools to handles made of wood or bone. More than 1,000 stone tools were collected from the two caves.

Chemical analysis of 10 flints using gas chromatography/mass spectrometry showed that the stone tools had been coated with resin from local pine trees, and in one case, resin had also been mixed with beeswax.

“We continue to find evidence that the Neanderthals were not inferior primitives but were quite capable of doing things that have traditionally only been attributed to modern humans,” said Villa.

The research was supported by the NSF’s Archaeology Program in the Division of Behavioral and Cognitive Sciences.