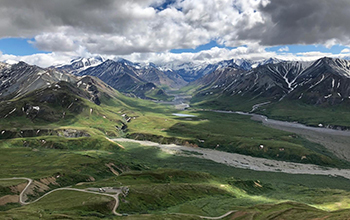 Rising temperatures in the tundra of northern latitudes could affect microbial communities in ways likely to increase their production of the greenhouse gases methane and carbon dioxide, a new study of experimentally warmed Alaskan soil suggests.

The research took place in tundra in the interior of Alaska near Denali National Park. Six experimental blocks were created. In each block, two snow fences were constructed several feet apart to control snow cover in the winter.

“We saw that microbial communities respond quite rapidly — within four or five years — to even modest levels of warming,” said Kostas Konstantinidis, the paper’s corresponding author and a scientist at the Georgia Institute of Technology. “Microbial species and their genes involved in carbon dioxide and methane release increased their abundance in response to the warming treatment. We were surprised to see such a response to even mild warming.”

The new study was reported in the journal Proceedings of the National Academy of Sciences. Researchers at the University of Oklahoma, Michigan State University and Northern Arizona University also collaborated.

The work underscores the importance of accurately representing the role of soil microbes in climate models, the scientists say.

The research is funded by NSF’s Division of Biological Infrastructure.