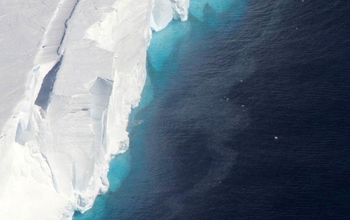 Images of vanishing Arctic ice are jarring, but the region’s potential contributions to sea level rise are no match for Antarctica’s. Now, a study says that instability hidden in Antarctic ice increases the likelihood of worst-case scenarios for the continent’s contribution to global sea level.

In the last six years, five closely observed Antarctic glaciers have doubled their rate of ice loss. At least one, Thwaites Glacier, modeled for the new study, will likely succumb to this instability, a volatile process that pushes ice into the ocean fast.

How much ice the glacier will shed in the coming 50 to 800 years can’t be projected exactly, scientists say, due to unpredictable fluctuations in climate and the need for more data. But researchers at the Georgia Institute of Technology and other institutions have factored the instability into 500 ice flow simulations for Thwaites.

The scenarios together point to the eventual triggering of the instability. Even if global warming were to stop, the instability would keep pushing ice out to sea at an accelerated rate over the coming centuries.

“This study underscores the sensitivity of key Antarctic glaciers to instability,” says Paul Cutler, director of NSF’s Antarctic Glaciology Program. “The warping influence of these instabilities on the uncertainty distribution for sea level predictions is of great concern, and is a strong motivator for research that will tighten the error bars on predictions of Antarctica’s contribution to sea level rise.”

The research was funded by NSF’s Office of Polar Programs.