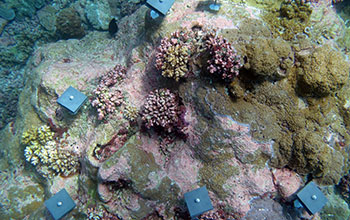 Number of young corals on tropical reefs has declined

Coral reefs are retreating from equatorial waters and establishing new reefs in more temperate regions, according to NSF-funded research published in the journal Marine Ecology Progress Series. Scientists found that the number of young corals on tropical reefs has declined by 85 percent – and doubled on subtropical reefs – over the last four decades.

The research was conducted in part at NSF’s Moorea Coral Reef Long-Term Ecological Research site in French Polynesia, one of 28 such NSF long-term research sites across the country and around the globe.

“Climate change seems to be redistributing coral reefs, the same way it is shifting many other marine species,” said Nichole Price, a senior research scientist at the Bigelow Laboratory for Ocean Sciences and lead author of the paper. “The clarity in this trend is stunning, but we don’t yet know whether the new reefs can support the incredible diversity of tropical systems.”

As oceans warm, cooler subtropical environments are becoming more favorable for corals than the equatorial waters where they traditionally thrived. That’s allowing drifting coral larvae to settle and grow in new regions.

The scientists, who are affiliated with more than a dozen institutions, believe that only certain types of coral are able to reach these new locations, based on how far their microscopic larvae can drift on currents before they run out of limited fat stores.

“This report addresses the important question of whether warming waters have resulted in increases in coral populations in new locations,” said David Garrison, a program director in NSF’s Division of Ocean Sciences, which funded the research. “Whether it offers hope for the sustainability of coral reefs requires more research and monitoring.”