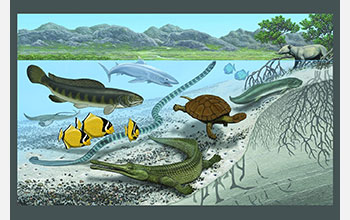 A new paper in the Bulletin of the American Museum of Natural History describes the Trans-Saharan Seaway that existed 50 to 100 million years ago in the region of the current Sahara Desert. The creatures that lived there were huge in comparison to their modern counterparts.

Led by NSF-funded scientist Maureen O’Leary of Stony Brook University, the study reveals the first reconstructions of extinct aquatic species in their habitats along the seaway.

The Sahara Desert was once underwater, in contrast to its present-day arid environment. This dramatic difference over time is recorded in the rock and fossil record of West Africa.

The region was bisected by a shallow saltwater body during a time of high global sea level. The Bulletin paper presents analyses of three expeditions led by O’Leary to rock exposures in the Sahara.

“Fossils found on the expeditions indicate that the sea supported some of the largest sea snakes and catfish that ever lived, extinct fishes that were giants compared to their modern-day relatives, mollusk-crushing fishes, tropical invertebrates, long-snouted crocodilians, early mammals and mangrove forests,” said O’Leary. “Because the seaway changed in size and geography frequently, it may have resulted in ‘islands of water’ that stimulated species gigantism.”

The paper contains the first reconstructions of ancient relatives of elephants and large apex predators such as sharks, crocodilians and sea snakes.