Perfect timing: Making the ‘switch’ from juvenile to adult 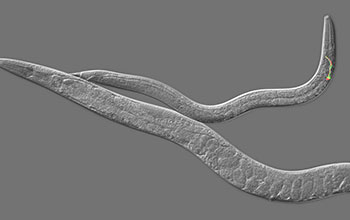 New roundworm research uncovers clues about the onset of puberty

Very little is known about how the onset of puberty is controlled in humans, but an NSF-funded discovery of a new gene in the roundworm C. elegans could be the “missing link” that determines the juvenile-to-adult transition.

Two genes, LIN28 and MKRN3, are known to be associated with precocious puberty in humans, with juveniles as young as six starting to develop adult features. These genes are found in all animals, including C. elegans, in which they also control the juvenile-to-adult transition. Until the new discovery, it was unclear how these two genes are connected.

The more obvious signs of the transition of juvenile to adult tend to be external — body morphology, matured genitalia — but nervous system changes are also occurring at the same time. In humans, the maturation of the brain during adolescence is associated with increased vulnerability to a variety of neuropsychiatric disorders, so a better understanding of these processes is important for understanding mental health as well as basic neurobiology.

Two new studies in the labs of Douglas Portman at the University of Rochester Medical Center and David Fitch at New York University, published in Developmental Cell and eLife, identified a new developmental timing mechanism involving a long non-coding RNA in the microscopic C. elegans. Their research revealed a surprising new molecular mechanism that controls the timing of sex-specific changes in body shape, the maturation of neural circuits, and behavior.