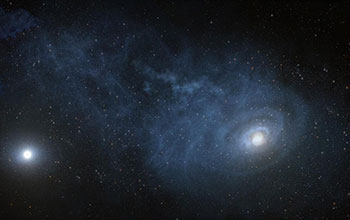 Galaxies grow by accumulating gas from their surroundings and converting it to stars, but the details of this process have remained murky. New observations, made using the Keck Cosmic Web Imager at the W. M. Keck Observatory in Hawaii, now provide the most direct evidence yet that filaments of cool gas spiral into young galaxies, supplying the fuel for stars.

“For the first time, we are seeing filaments of gas directly spiral into a galaxy. It’s like a pipeline going straight in,” says California Institute of Technology professor of physics Christopher Martin, who is lead author of a new paper appearing in Nature Astronomy and reported in a Caltech press release. “This pipeline of gas sustains star formation, explaining how galaxies can make stars on very fast timescales.”

For years, astronomers have debated exactly how gas makes its way to the center of galaxies. Does it heat up dramatically as it collides with the surrounding hot gas? Or does it stream in along thin dense filaments, remaining relatively cold?

“Modern theory suggests that the answer is probably a mix of both but proving the existence of these cold streams of gas had remained a major challenge until now,” says co-author Donal O’Sullivan, a doctoral student in Martin’s group who built part of the imager.

“We now have direct evidence that the cold accretion model is a viable explanation for rapid star formation in distant galaxies,” says Matthew Benacquista, a program director in the National Science Foundation’s Division of Astronomical Sciences, which funded the research. “Only with recent instrumentation such as the Keck Cosmic Web Imager has testing these theories become feasible.”