Ice is sliding toward edges of Greenland Ice Sheet 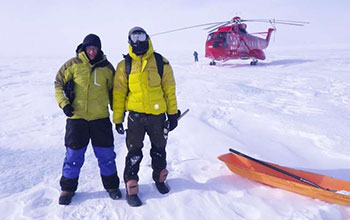 Ice on the Greenland Ice Sheet doesn’t just melt. The ice slides rapidly across its bed toward the ice sheet’s edges. As a result, ice is moving to high-melt marginal zones more rapidly than previously thought.

A research group headed by University of Wyoming geologists Neil Humphrey and Nathan Maier discovered that beds with till or mud, which act as lubricants, aren’t needed to have high rates of sliding.

The scientists found that ice slides over bedrock much faster than previous theories predicted.

“The Greenland Ice Sheet is sliding over a surface that theory says it shouldn’t be able to rapidly slide over,” Humphrey says. “What’s important is that, because of this, you get a lot of ice going to the ocean or to low altitudes where it can melt really fast. It’s like a lump of molasses sliding off the continent.”

Maier adds that the “measurements of sliding-dominated flow over a hard bed in a slow-moving region were surprising because people don’t typically associate these regions with high sliding. Generally, people associate lots of sliding motion with regions that have soft beds like mud or exceptionally high-sliding velocities, such as ice streams. Yet we found the highest fraction of sliding measured to date.”

The scientists are co-authors of a paper published in the journal Science Advances. Other contributors to the paper were geoscientists Joel Harper and Toby Meierbachtol of the University of Montana. The paper represents work conducted on the Greenland Ice Sheet from 2014-16.

The research was funded by NSF’s Office of Polar Programs.