Vitamin C is key to protection of new nanomaterial 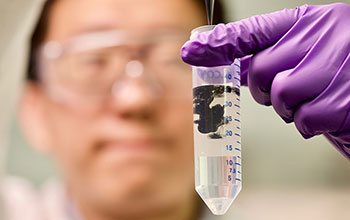 In work that could open future applications for a new class of nanomaterials known as MXenes (pronounced “Maxines”), researchers at Texas A&M University have discovered a simple, inexpensive way to prevent the materials’ rapid degradation.

Two-dimensional MXene nanosheets have promise in applications ranging from energy storage to water purification. However, MXenes have an Achilles’ heel: they rapidly degrade when kept in the open.
According to the Texas A&M team, the solution to the problem involves exposing MXenes to a family of compounds best represented by a natural dietary supplement such as vitamin C.

“With these findings, shelf-stable MXenes become possible and engineering-grade MXene-based materials can become a practical reality,” the researchers write in a paper in an upcoming issue of the online journal Matter.

MXenes are sheets of materials only a few atoms thick that are mostly composed of layers of metals like titanium interleaved by carbon and/or nitrogen.

Due to their nanothickness and the variety of elements they can contain (other nanomaterials like graphene are typically made up of only one or two elements), “these materials tend to have really interesting properties, like high electrical conductivity and high catalytic activity,” said Micah Green, a chemical engineer and materials scientist at Texas A&M who led the work.

As a result of those properties, MXenes have potential applications in everything from batteries to electronic sensors.

The research was funded by NSF’s Directorate for Engineering.

“Because the special properties of new nanomaterials like MXenes may bring new capabilities and improved performance to multiple technologies, NSF has long invested in fundamental research to engineer and process nanomaterials,” said Andrew Wells, an NSF program director for Advanced Manufacturing.