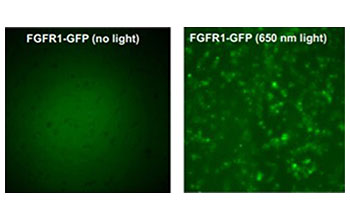 Advances in nanophotonics could one day lead to new treatments for cancer, mental disorders

A new University at Buffalo-led study supported by NSF describes how researchers wirelessly controlled FGFR1 — a gene that plays a key role in how animals grow from embryos to adults — in lab-grown brain tissue.

The ability to manipulate the gene, the study’s authors say, could one day lead to new cancer treatments and ways to prevent and treat mental disorders such as schizophrenia.

The work — spearheaded by University at Buffalo researchers Josep Jornet, Michal Stachowiak, Yongho Bae and Ewa Stachowiak — was reported in the journal Proceedings of the Institute of Electrical and Electronics Engineers.

The research team manipulated the gene by creating tiny photonic brain implants. These wireless devices include nano-lasers and nano-antennas and will, in the future, include nano-detectors.

The result is an initial step toward genetic manipulation technology that could affect the treatment of cancer, as well as the prevention and treatment of schizophrenia and other neurological illnesses. It centers on the creation of a new subfield of research the study’s authors are calling “optogenomics,” or controlling the genome through laser light and nanotechnology.

“The potential of optogenomic interfaces is enormous,” says Jornet. “It could drastically reduce the need for drugs and other therapies for certain illnesses. It could also change how humans interact with machines.”

The research was funded by NSF’s programs in Biophotonics and in Emerging Frontiers in Research and Innovation.

“NSF-funded researchers are creating new ways to understand and control biological processes in real time,” says Leon Esterowitz, program director for the NSF Biophotonics program. “NSF makes these investments to gain knowledge of fundamental engineering and biology, and this knowledge may one day lead to improvements in human health.”