‘Oumuamua interstellar object was not an alien spacecraft 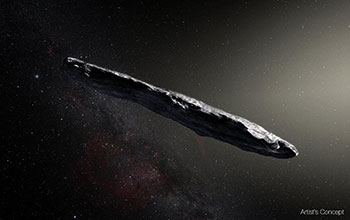 The first known interstellar object to visit our solar system was discovered on Oct. 19, 2017, by the Panoramic Survey Telescope and Rapid Response System 1 Telescope located at the University of Hawaii’s Haleakala Observatory. The object’s odd characteristics — resembling both a comet and an asteroid — led researchers to question what it was; there was even speculation it was an alien spacecraft.

Now, new analysis of the object — formally named 1I/2017 U1, with a common name of “‘Oumuamua” — by an international team of astronomers and co-led by University of Maryland associate research scientist Matthew Knight has been published in the journal Nature Astronomy.

According to the analysis, ‘Oumuamua’s motion through our solar system is puzzling, appearing to accelerate along its trajectory — a typical feature of comets — but showing no evidence of the gaseous emissions that typically create this acceleration.

“We have never seen anything like ‘Oumuamua in our solar system. It’s really a mystery still,” said Knight. “But our preference is to stick with analogs we know, unless or until we find something unique. The alien spacecraft hypothesis is a fun idea, but our analysis suggests there is a whole host of natural phenomena that could explain it.”

Observations of objects like ‘Oumuamua are expected to increase when the NSF-supported Large Synpotic Survey Telescope, LSST, comes online in 2022.

“The LSST will be leaps and bounds beyond any other survey we have in terms of capability to find small interstellar visitors,” Knight said. “We may start seeing a new object every year. That’s when we’ll start to know whether ‘Oumuamua is weird, or common.”

The research was supported by NSF’s Astronomy program.