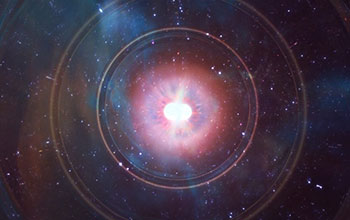 Astronomers using National Science Foundation radio telescopes have demonstrated how a combination of gravitational-wave and radio observations, along with theoretical modeling, can turn the mergers of pairs of neutron stars into a “cosmic ruler” capable of measuring the expansion of the universe and resolving an outstanding question over its rate.

The astronomers used NSF’s Very Long Baseline Array, the Karl G. Jansky Very Large Array and the Robert C. Byrd Green Bank Telescope to study the aftermath of the collision of two neutron stars that produced gravitational waves detected in 2017. This event offered a new way to measure the expansion rate of the universe, known by scientists as the Hubble Constant. The expansion rate of the universe can be used to determine its size and age, as well as serve as an essential tool for interpreting observations of objects elsewhere in the universe.

Two leading methods of determining the Hubble Constant use the characteristics of the Cosmic Microwave Background — the leftover radiation from the Big Bang — or a specific type of supernova explosion in the distant universe, called Type Ia. However, these two methods give different results.

“The neutron star merger gives us a new way of measuring the Hubble Constant, and hopefully of resolving the problem,” said Kunal Mooley, of the National Radio Astronomy Observatory and Caltech.

NSF funds the research through its Directorate for Mathematical and Physical Sciences. An NRAO press release provides additional detail, as do the results published in a recent issue of the journal Nature Astronomy.