Between ants and acacias, timing is everything 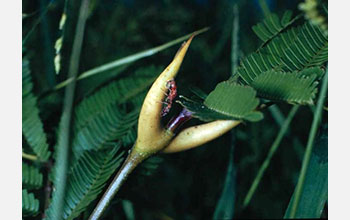 In the 1960s, University of Pennsylvania biologist Dan Janzen re-described what has become a classic example of biological mutualism: the relationship between acacia-ants and ant-acacia trees. The acacia trees produce specialized structures to shelter and feed the ant colony, and the ants, in turn, defend the tree against herbivores.

In a new study in Proceedings of the National Academy of Sciences, colleagues of Janzen’s at Penn uncovered a genetic mechanism that programs the plant in the ant-acacia relationship.

Scott Poethig, a plant biologist at Penn, and Aaron Leichty of the University of California, Davis, show that as part of an age-dependent phenomenon in plant development, the acacias develop the traits necessary to feed the ant colony: hollow, swollen thorns to house them; and nectaries and nutrient-rich leaflet tips called Beltian bodies to feed them.

“There is a cost associated with making these traits,” says Poethig, senior author of the report, “but the plant needs them, otherwise it’s a goner. Dan showed: no ants, no plants. The plant is eaten by everything from grasshoppers to mice.

“So there’s a tradeoff happening. And what we found is that these traits seem to have evolved on the back of a preexisting pathway that governs a developmental transition in plants.”

With acacia seeds in hand, Leichty began to develop strategies to grow and study acacias in the lab. Once he had the plants growing reliably, he observed what Janzen had seen in the wild a half-century before.

“Sure enough, the traits appear, but not right away,” Leichty says.

To Janzen, the find is supportive of his field discoveries, making a case for the blending of field and lab investigations.

The research is funded by NSF’s Division of Integrative Organismal Systems.