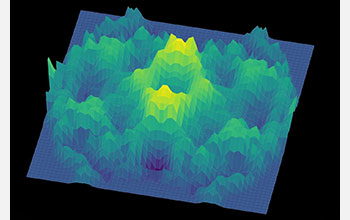 There’s no known way to prove a 3D “quantum spin liquid” exists, so Rice University physicists and their collaborators did the next best thing. They showed that single crystals of cerium zirconium pyrochlore had the right stuff to qualify as the first possible 3D version of the long-sought state of matter.

Despite the name, a quantum spin liquid is a solid material in which the weird property of quantum mechanics — entanglement — ensures a liquidlike magnetic state.

In a paper in Nature Physics, researchers offered a host of experimental evidence — including crucial neutron-scattering experiments at Oak Ridge National Laboratory and muon spin relaxation experiments at Switzerland’s Paul Scherrer Institute — to support their case that cerium zirconium pyrochlore, in its single-crystal form, is the first material that qualifies as a 3D quantum spin liquid.

“A quantum spin liquid is something that scientists define based on what you don’t see,” said Rice’s Pengcheng Dai, corresponding author of the study. “You don’t see long-range order in the arrangement of spins. You don’t see disorder. And various other things. It’s not this. It’s not that. There’s no conclusive positive identification.”

The research team’s samples are believed to be the first of their kind: Pyrochlores because of their 2-to-2-to-7 ratio of cerium, zirconium and oxygen; and single crystals because of the inside arrangement of atoms, arranged in a continuous, unbroken lattice.

The research was funded by NSF’s Division of Materials Research.