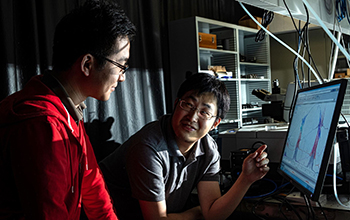 A humble carbon nanotube may be just the device to make solar panels — and anything else that loses energy through heat — far more efficient.

Their invention is a hyperbolic thermal emitter that can absorb intense heat that would otherwise be spewed into the atmosphere, squeeze it into a narrow bandwidth, and emit it as light that can be turned into electricity.

“Thermal photons are photons emitted from a hot body,” Kono said. “If you look at something hot with an infrared camera, you see it glow. The camera is capturing these thermally excited photons.”

Infrared radiation is a component of sunlight that delivers heat to the planet, but it’s only a small part of the electromagnetic spectrum. “Any hot surface emits light as thermal radiation,” Naik said. “The problem is that thermal radiation is broadband, while the conversion of light to electricity is efficient only if the emission is in a narrow band. The challenge was to squeeze broadband photons into a narrow band.”

The nanotube films presented an opportunity to isolate mid-infrared photons that would otherwise be wasted.

Naik said that adding the emitters to standard solar cells could boost their efficiency from the current peak of about 22%. “By squeezing all the wasted thermal energy into a small spectral region, we can turn it into electricity very efficiently,” he said. “The theoretical prediction is that we can get 80% efficiency.”

The research was funded by NSF’s Directorate for Engineering.