Iconic California beaches have lost most of their biodiversity 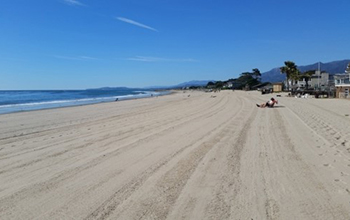 Dig a few inches into the sand on many beaches in Southern California — historically home to some of the most biologically diverse sandy beaches in the world — and you’ll find them teeming with life such as sand crabs and clams. But for about a third of the sandy beaches between Santa Barbara and San Diego, only a small subset of highly specialized beach animals remain, and in reduced numbers.

This lack of biodiversity, say researchers at the University of California, Santa Barbara, is an unintended consequence of the quest to maintain the Instagram-ready, tourist-accommodating, iconic look of Southern California’s urban beaches.

Cities up and down the coast have flattened dunes, destroyed native vegetation and groomed the sand with heavy equipment such that “natural beauty” is about as natural as a sand parking lot, say the scientists.

All this, they write in a paper in the journal Ecological Indicators, has major impacts on the larger beach ecosystem.

Sandy beaches, given their constantly moving sand and water, are often thought of as resilient; however, the study shows how sensitive these ecosystems are to human disturbance. That sensitivity is particularly apparent for species associated with seaweed known as wrack. Small invertebrates that inhabit the upper intertidal zone rely on stranded wrack for food and shelter.

“This study will force us to make critical choices about whether we value well-groomed beaches or healthy natural ecosystems,” said David Garrison, a program director in NSF’s Division of Ocean Sciences, which funded the research through its Santa Barbara Coastal Long-Term Ecological Research site. “Shorebirds and other marine life we value are critically dependent on resources provided by thriving ecosystems.”