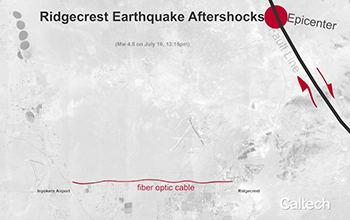 Seismologists at Caltech are using fiber optic cables to monitor and record aftershocks from the 2019 Ridgecrest earthquake in greater detail than previously possible. Thousands of tiny aftershocks are occurring throughout the region. An unprecedented number will now be tracked and studied.

The nascent technique, supported by NSF, involves shooting a beam of light down a “dark,” or unused, fiber optic cable. When the beam hits tiny imperfections in the cable, a minuscule portion of the light is reflected and recorded.

Each imperfection acts as a trackable waypoint along the fiber optic cable, which is usually buried several feet beneath the earth’s surface. Seismic waves moving through the ground cause the cable to expand and contract minutely, which changes the travel time of light to and from these waypoints. By monitoring these changes, seismologists can observe the motion of seismic waves.

“These imperfections occur frequently enough that every few meters of fiber optic cable act like an individual seismometer,” says Zhongwen Zhan, a geophysicist at Caltech who is leading the effort. “For the 50 kilometers of fiber optic cable in three different locations we’ve tapped into for the project, it’s roughly akin to deploying more than 6,000 seismometers in the area.”

“Fiber optic research has the potential to transform seismology, and this project shows how much we can learn about an earthquake like Ridgecrest with such extensive data,” says Eva Zanzerkia, a program director in NSF’s Division of Earth Sciences, which funded the research. “Building infrastructure that benefits science and the public is a win-win.”