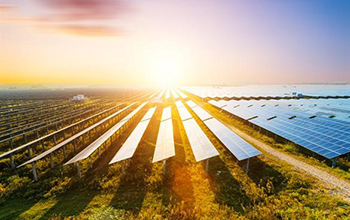 Solar panel installations are on the rise in the U.S., with more than 2 million new installations in early 2019, the most ever recorded in a first quarter, according to a recent report.

To meet the ever-increasing demands, low-cost and more efficient alternatives to silicon-based solar cells — currently the most widely used technology — are desirable, scientists say. In the past decade, lead-halide perovskites have surged as the most promising class of alternative materials; however, they are unstable. They contain lead, which is toxic and poses potential health and environmental hazards such as groundwater contamination.

Now, using a novel double perovskite oxide discovered through data analytics and quantum-mechanical calculations, engineers at Washington University in St. Louis has found what they believe is a more stable, less toxic semiconductor for solar applications.

Their work was published in Chemistry of Materials.

NSF-funded materials scientist Rohan Mishra led the team that discovered the new semiconductor, made of potassium, barium, tellurium, bismuth and oxygen. The lead-free double perovskite oxide was one of an initial 30,000 potential bismuth-based oxides. Of those 30,000, only about 25 were known compounds.

Using materials informatics and quantum mechanical calculations on one of the fastest supercomputers in the world, researcher Arashdeep Singh Thind found the semiconductor to be the most promising of the 30,000 potential oxides.

“We found that this looked to be the most stable compound and that it could be synthesized in the lab,” Mishra said.

“I commend the team on this important finding that is more sustainable,” says Lynnette Madsen, a program director in NSF’s Division of Materials Research. “Sustainability continues to be important to NSF, as our new program on Critical Aspects of Sustainability indicates.”