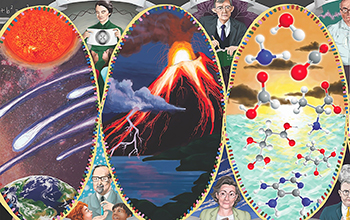 Scientists discover how early predecessors of proteins may have formed

When Earth was a lifeless planet about 4 billion years ago, chemical components came together in tiny molecular chains that would later evolve into proteins, which are crucial life building blocks. A new study has shown how some early predecessors of proteins may have fallen into line.

Under laboratory conditions mimicking those on pre-life Earth, a small selection of amino acids linked up spontaneously into neat segments in a way that surprised researchers at the Georgia Institute of Technology and their colleagues.

‘The reactions resulted mostly in strings that were closer to today’s actual proteins and less in chains that included non-biological amino acids.

In particular, the researchers thought the non-biological amino acids would outcompete the biological amino acid lysine, but it was not the case. They also thought lysine would often not fit neatly into the chains the way it does in proteins. The reaction surprised them again.

“Lysine went into the chains predominantly in the way it is connected in proteins today,” said Nick Hud, director of the NSF/NASA Center for Chemical Evolution, which explores the chemistry that may have paved the way to first life.

“This work is a real step toward understanding why certain building blocks are found in the proteins essential for life,” said Kathy Covert, program director in NSF’s Division of Chemistry, which co-funds the Center for Chemical Evolution. “Through research like this, the center is realizing its ambitious mission to shed light on the chemistries of biopolymers, a foundation of all living things.”