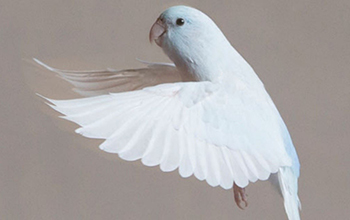 Under the watchful eyes of five high-speed cameras, a small bird named Gary waits for the signal to fly. Diana Chin, a researcher at Stanford University and Gary’s trainer, points her finger to a perch about 20 inches away. The catch here is that the perch is covered in Teflon, making it seemingly impossible to grasp.

Gary’s successful touchdown on the Teflon — and on other perches of varying materials — is teaching scientists how they might create machines that land like a bird.

Even the most advanced robots come nowhere near the grasping ability of animals when dealing with objects of varying shapes, sizes and textures. The researchers gathered data on how Gary and two other birds land on different surfaces, including natural perches and artificial perches covered in foam, sandpaper and Teflon.

“This is not unlike asking an Olympic gymnast to land on Teflon-covered high bars without chalking their hands,” said David Lentink, also at Stanford and senior author of a paper published in eLife. Yet, the birds made what seems almost impossible for a human look effortless.

The group’s research also included detailed studies of the friction produced by the birds’ claws and feet. The biologists found that the secret to the birds’ perching versatility is in their grip.

“Through studying natural systems that have evolved over millions of years, we can make tremendous strides toward constructing systems with unprecedented capabilities,” said William Roderick, a researcher at Stanford and lead author of the paper.

“This interdisciplinary study integrated biology, physics and engineering to understand a complex natural behavior, and resulted in surprising insights that may lead to important bio-mimetic applications,” said Kathryn Dickson, a program director in NSF’s Division of Integrative Organismal Systems, which funded the research.