Mercury levels in fish are on the rise 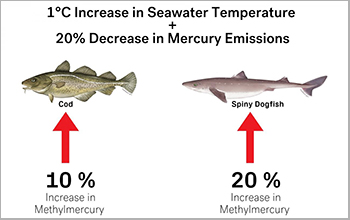 Add another item to the ever-growing list of the dangerous impacts of climate change: Warming oceans are leading to an increase of the harmful neurotoxicant methylmercury in popular seafood, including cod, Atlantic bluefin tuna and swordfish, according to research led by researchers at Harvard University.

The findings are published in the journal Nature.

“This research is a major advance in understanding how and why ocean predators, such as tuna and swordfish, are accumulating mercury,” said Elsie Sunderland, senior author of the paper.

“Being able to predict the future of mercury levels in fish has been difficult to answer because, until now, we didn’t have a good understanding of why methylmercury levels were so high in big fish,” said Amina Schartup, first author of the paper.

Based on the new model, the researchers predict that an increase of 1 degree Celsius in seawater temperature, relative to the year 2000, would lead to a 32% increase in methylmercury levels in cod and a 70% increase in spiny dogfish.

“This study brings together different kinds of data with models in a way that will have a direct impact on how we manage fisheries,” says Hedy Edmonds, a program director in NSF’s Division of Ocean Sciences, which funded the research.