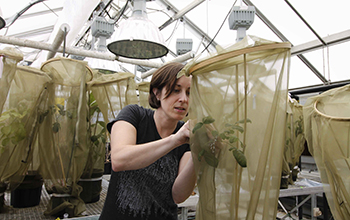 Tiny insects persist in the face of change

Scientists know that there is a thermal window when half-centimeter-long insects called treehoppers are active and looking for mates. Male tree hoppers produce songs to attract females, and females use these songs to choose good mates. Temperature shifts can potentially throw this delicate coordination off because the songs produced by male treehoppers vary with temperature. At some temperatures, male treehoppers can even sound like different species, potentially confusing females.

A Saint Louis University research team investigated how temperature variation could have a disruptive effect on the insects’ reproduction. The team studied how temperature affects male vibrational songs and female preferences for these songs. The researchers published their results in Journal of Evolutionary Biology.

Led by Kasey Fowler-Finn, scientists tested four groups of Enchenopa binotata treehoppers, each from a different location. They measured the frequency (pitch) of male vibrational songs, and the frequency most preferred by females across a range of temperatures from 18 to 36 degrees Celsius.

“This is an important step to a better understanding of how animals respond to changes in climate,” said Jodie Jawor, a program director in NSF’s Division of Integrative Organismal Systems, which funded the research.