Blue sharks use ocean eddies as fast-tracks to food 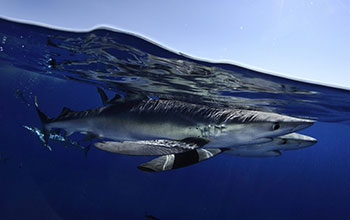 Blue sharks use large, swirling ocean currents known as eddies to fast-track their way to food in the twilight zone — a layer of the sea between 200 and 1,000 meters deep, according to new research by scientists at the Woods Hole Oceanographic Institution and the University of Washington. The results show that animals can read subtle ocean cues and follow them to where food is concentrated.

The findings were published in the journal Proceedings of the National Academy of Sciences.

The research revealed that blue sharks spent a good portion of their days using these whirling pockets of warm water to find prey. Camrin Braun, a University of Washington marine ecologist and lead author of the study, says the behavior of the blue sharks was similar to that of white sharks the team tracked in a study last year.

However, the two species had different preferences when it came to water temperature. White sharks, which are warm-blooded animals, used a combination of warm- and cold-water eddies to locate food in the twilight zone, while blue sharks — a cold-blooded species — relied exclusively on warm-water eddies.

“Blue sharks can’t regulate their body temperature internally to stay warmer than the ambient seawater like white sharks can,” said Braun. “We think that’s why they show a clear preference for warm-water eddies.”

“This finding came out of research focusing on how the physics of ocean eddies organizes biological activity,” says Mete Uz, a program director in NSF’s Division of Ocean Sciences, which funded the research. “The ocean may appear to our eye as a vast, featureless expanse, but the animals that live in it know how to read subtle cues and follow them to where their food is concentrated.”