Depleted seamounts near Hawaii recovering after decades of protection 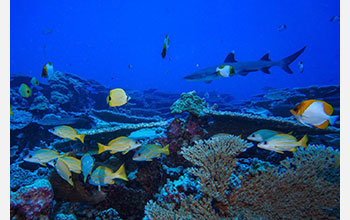 Overfished ecosystem showing signs of recovery after years of protection

For decades, overfishing and trawling — dragging the ocean bottom with heavy nets — devastated parts of an underwater mountain range in the Pacific Ocean near Hawaii, wrecking deep-sea corals and destroying much of their ecosystem.

But now, after years of protection, scientists see signs that this once-fertile area known as the Hawaiian-Emperor Seamount Chain is making a comeback.

Because of the slow-growing nature of the corals and sponges that live on seamounts, “it’s been hypothesized that if they’ve been trawled, there’s not much hope,” said Florida State University biological oceanographer Amy Baco-Taylor.

“We explored these sites fully expecting not to see any sign of recovery,” she said. “But we were surprised to find evidence that some species are starting to come back.”

Baco-Taylor and a team of researchers from Florida State and Texas A&M University published their findings in Sciences Advances. The understanding that a trawled seamount could recover is a game-changer in terms of fisheries management, the scientists said. Scientists and policymakers regularly debate whether protected areas can be reopened for fishing.

“This is a good story of how long-term protection allows for the recovery of vulnerable species,” Baco-Taylor said.

“This is really encouraging and surprising news,” said Daniel Thornhill, a program director in NSF’s Biological Oceanography Program. “With long-lived and slow-growing species, our expectation was that any damage was effectively permanent. This opens up the possibility that, given time and protection, deep-sea ecosystems can and will recover.”

Trawling has devastated seamounts around the world, and scientists have generally believed that ecological recovery was unlikely. However, in the case of the Hawaiian-Emperor Seamount Chain, said Baco-Taylor, there is a glimmer of hope.

The research was funded by NSF’s Division of Ocean Sciences.