A torque on conventional magnetic wisdom 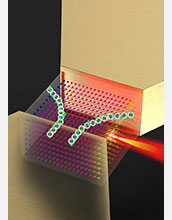 Physicists at the University of Illinois at Urbana-Champaign announced they have observed a magnetic phenomenon called the “anomalous spin-orbit torque,” or ASOT, for the first time. The team’s findings are published in the journal Nature Nanotechnology.

The observation, made by Professor Virginia Lorenz and graduate student Wenrui Wang, demonstrates that there exists competition between what is known as spin-orbit coupling and the alignment of an electron spin to the magnetization. This can be thought of as analogous to the anomalous Hall effect, or AHE.

The discovery has implications for energy efficient magnetic-memory technology.

Researchers have known for some time about phenomena like AHE in which spins of a certain species accumulate on a film edge, where they can be detected with electric measurements. This type of experiment requires the magnetization of the film to point perpendicular to the plane of the film.

Effects like the AHE had not been found for magnetizations that point in-plane, until now.

Magnetism is ubiquitous — we use it every day, for example, to stick papers to a refrigerator door or to ensure that our phone chargers do not detach prematurely.

Microscopically, magnetism arises from a collection of electrons, which all have a property known as spin. Spin is one source of angular momentum for electrons and its “movement” can be likened to how toy tops spin. For electrons, spin comes in up spin and down spin. Depending on how the spins collectively point, a material might be ferromagnetic, having neighboring electron spins all pointing in the same direction, or antiferromagnetic, having neighboring electron spins pointing in opposite directions. These are just two of several types of magnetism.