Scent brings songbirds to the yard 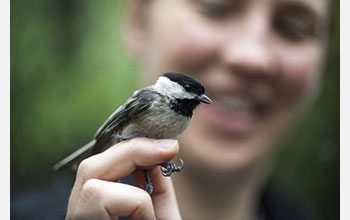 Chickadees are interested in scents. That’s the news from a study out of Lehigh University, the first to document naturally hybridizing songbirds’ preference for the smell of their own species.

Amber Rice, an evolutionary biologist at Lehigh, studies hybridization — when separate species come into contact and mate — to better understand how species originate and how the existing, parent species are maintained. Rice researches the black-capped chickadee and its relative, the Carolina chickadee.

She and scientist Alex Van Huynh set out to test the potential for scent to act as a mate choice cue in the chickadees. They wondered whether smell might contribute to the reproductive isolation of black-capped and Carolina chickadees in a zone in Pennsylvania where birds are hybridizing.

Huynh and Rice found that black-capped and Carolina chickadees produce chemically distinct oils used to maintain their feathers; the oils also contain scent-producing compounds. The researchers discovered that both chickadee species prefer the smell of their own species over the smell of the other species. The results are published in a paper in the journal Ecology and Evolution.

“The sense of smell has been understudied in birds, particularly songbirds, because they frequently have such impressive plumage and song variation,” says Rice. “Other work has documented that some songbird species can smell, and prefer their own species’ odors, but this is the first example in currently hybridizing species that we know of.”

Jodie Jawor, a program director in NSF’s Division of Integrative Organismal Biology, which funded the research, says, “There’s still much to be learned about how animals communicate with one another. This work adds information to a unique and understudied communication dimension in birds.”