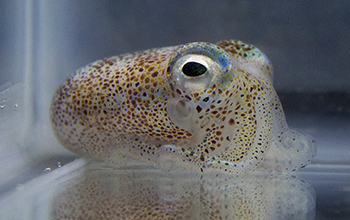 The molecular mechanism used by many bacteria to kill neighboring cells has redundancy built into its genetic makeup, which could allow for the mechanism to be expressed in different environments, say researchers at Penn State and the University of Wisconsin-Madison.

A paper online in the Journal of Bacteriology provides insights into the molecular mechanisms of competition among bacteria.

“Many organisms, including humans, acquire bacteria from their environment,” said Tim Miyashiro, a biochemist and molecular biologist at Penn State and the leader of the research team. “These bacteria can contribute to functions within the host organism, like how our gut bacteria help us digest food. We’re interested in the interactions among bacteria cells, and between bacteria and their hosts, to better understand these mutually beneficial symbiotic relationships.”

Cells of the bioluminescent bacteria Vibrio fisheri take up residence in the light organ of newly hatched bobtail squid. At night, the bacteria produce a blue glow that researchers believe obscures a squid’s silhouette and helps protect it from predators. The light organ has pockets, or crypts, in the squid’s skin that provide nutrients and a safe environment for the bacteria.

“When the squid hatches, it doesn’t yet have any bacteria in its light organ,” said Miyashiro. “But bacteria in the environment quickly colonize the squid’s light organ.” Some of these different bacteria strains can coexist, but others can’t.

“Microbial symbioses are essentially universal in animals, and are crucial to the health and development of both partners,” says Irwin Forseth, a program director in NSF’s Division of Integrative Organismal Systems, which funded the research.  “The results from this study highlight the role small genetic changes can play in microbe interactions. Increased understanding will allow us to better predict organisms’ performance in changing environments.”