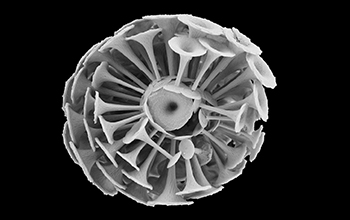 Globally important ocean algae called coccolithophores are mysteriously scarce in one of the most productive regions of the Atlantic Ocean, according to a new paper in Deep Sea Research I. A massive dataset has revealed patterns in the regions where coccolithophores live, illuminating the inner workings of the ocean carbon cycle.

“Understanding large-scale patterns helps us understand ocean productivity in the entire Atlantic basin,” said William Balch, a scientist at the Bigelow Laboratory for Ocean Sciences and the paper’s lead author. “Collecting this dataset has been a superhuman effort that has taken hundreds of days at sea and years of analysis.”

The researchers found that coccolithophores both struggle and thrive in unexpected places throughout the Atlantic Ocean. They are most abundant in subpolar and temperate waters and surprisingly scarce around the equator, where an abundance of nutrients and sunlight create one of the most biologically productive regions of the global ocean.

The team also discovered that some coccolithophore species thrive deep below the surface near the farthest reaches of sunlight — within or just above an ocean layer called “Sub-Antarctic mode water.” This distinct feature flows north from the Southern Ocean and provides nutrients to much of the global ocean, including the Northern Hemisphere. Balch suspects that booming coccolithophore populations in the Southern Ocean are depleting the water layer’s nutrient supply and altering its chemistry — potentially making the water inhospitable to coccolithophores by the time it reaches the equator.

“Sub-Antarctic mode water exerts a staggering level of control on much of the global ocean,” Balch said. “If coccolithophores are changing its essential properties, they could be influencing which species grow in food webs as far away as the equator or even in the Northern Hemisphere.”

The research is funded in part by NSF’s Division of Ocean Sciences.