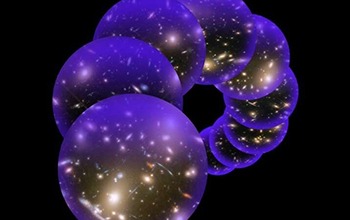 How do galaxies such as our Milky Way come into existence? How do they grow and change over time? The science behind galaxy formation has long been a puzzle, but a University of Arizona-led team of scientists is one step closer to finding answers, thanks to supercomputer simulations.

Observing real galaxies in space can only provide snapshots in time, so researchers who study how galaxies evolve over billions of years need to use computer simulations. Traditionally, astronomers have used simulations to invent theories of galaxy formation and test them, but they have had to proceed one galaxy at a time. Peter Behroozi of the university’s Steward Observatory and colleagues overcame this hurdle by generating millions of different universes on a supercomputer, each according to different physical theories for how galaxies form.

The findings, published in the Monthly Notices of the Royal Astronomical Society, challenge fundamental ideas about the role dark matter plays in galaxy formation, the evolution of galaxies over time and the birth of stars.

The study is the first to create self-consistent universes that are exact replicas of the real ones — computer simulations that each represent a sizeable chunk of the actual cosmos, containing 12 million galaxies and spanning the time from 400 million years after the Big Bang to the present day.

The results from the “UniverseMachine,” as the authors call their approach, have helped resolve the long-standing paradox of why galaxies cease to form new stars even when they retain plenty of hydrogen gas, the raw material from which stars are forged.

The research is partially funded by NSF’s Division of Physics through grants to UC Santa Barbara’s Kavli Institute for Theoretical Physics and the Aspen Center for Physics.