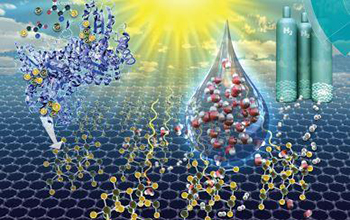 Engineers at Lehigh University funded by the National Science Foundation are the first to utilize a single enzyme biomineralization process to create a catalyst that uses the energy of captured sunlight to split water molecules to produce hydrogen. The synthesis process overcomes challenges of previously reported methods.

Solar-driven water splitting is a promising route towards a renewable energy-based economy. The generated hydrogen could serve as both a transportation fuel and a critical feedstock for fertilizer and chemical production. Both sectors currently contribute a large part of total greenhouse gas emissions.

“NSF funded this fundamental research to understand and engineer the process of how living things create bones, shells and other mineral-based tissues,” said Nora Savage, a program director for NSF’s sustainable manufacturing program, which funded the study. The nanostructures “may unlock many new capabilities — in this case, to create special catalysts for chemical reactions that could provide sustainable energy.”

A Lehigh press release details the challenges of realizing solar-driven, hydrogen energy production. Though water may be plentiful, previously-explored methods are complex and require environmentally harmful solvents and massive amounts of energy to produce the needed catalysts at a large scale. The expense and harm to the environment make these methods unworkable as long-term solutions. Lehigh’s new biomineralization method shows promise at overcoming these challenges.

The team reported their results in an article featured on the cover of the August 7 issue of Green Chemistry, a journal of the Royal Society of Chemistry.