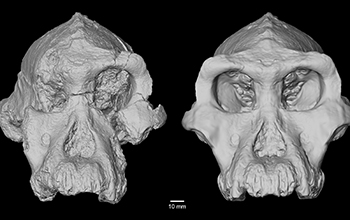 According to an international team of researchers, the fossil revealed that the two species coexisted for about 100,000 years rather than at separate time periods as previously thought.

A digital reconstruction of the fossil that facilitated its analysis was initiated at Penn State University. The results appear in two papers in the August 29 issue of the journal Nature and in a Penn State press release and a Cleveland Museum press release.

“This is a game changer in our understanding of human evolution during the Pliocene [5.3 million to 2.6 million years ago],” said Yohannes Haile-Selassie, curator, Cleveland Museum of Natural History.

Led by Haile-Selassie, paleoanthropologists conducted extensive analyses, and geologists determined the age and context of the fossil.

The cranium “has a mix of primitive and derived facial and cranial features that I didn’t expect to see on a single individual,” said Haile-Selassie.

The completeness of the fossil allowed the team to reconstruct a face.

A collaboration among Timothy M. Ryan of Penn State and Stefano Benazzi and Antonino Vazzana of the University of Bologna, Italy allowed reconstruction of the fossils.

“A relatively complete cranium from the Afar region is a valuable addition to the hominin fossil record, providing another piece in the puzzle for reconstructing hominin adaptation and evolution,” said Rebecca Ferrell, program director for NSF’s Biological Anthropology program.