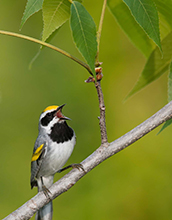 A gene associated with the migratory patterns of golden-winged and blue-winged warblers could lend insight into the longstanding question of how birds migrate across long distances.

A new study led by researchers at Penn State and the Cornell Lab of Ornithology is the first to combine whole genome sequencing and migration tracking technology to pinpoint a single gene associated with the complex suite of traits that determine migratory behavior.

The findings may have important conservation implications for declining populations of golden-winged warblers. The paper appears in the journal Proceedings of the National Academy of Sciences.

“The great migrations of the world have been inspiring people for hundreds of years,” said David Toews, a biologist at Penn State and leader of the research team. “The migration of birds is particularly fascinating because small species primarily navigate alone, at night, and at high altitudes, so people do not always see it happening.”

Researchers have known for decades that there is a genetic component to migration. Recent studies in birds have identified large regions of the genome associated with migration, encompassing hundreds of genes, but it has been difficult to pinpoint the specific roles of any single gene.

“In this study, we found only one gene associated with the final wintering destination of golden-winged and blue-winged warblers,” said Toews.

The described gene is also associated with a neurological disorder in humans.

“Genes we associate with a particular disease or trait often have many other functions,” says Francisco (Paco) Moore, a program director in NSF’s Division of Environmental Biology, which funded the research. “Studying natural systems, like these warblers, gives us clues to the variety of functions a single gene can perform.”