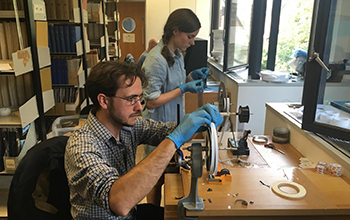 Newly digitized vintage film has doubled how far back scientists can peer into the history of ice thickness and structures within and beneath Antarctic ice sheets.

The film has revealed that an ice shelf on Thwaites Glacier in West Antarctica is being thawed by ocean warmth more quickly than previously thought. The finding provides key validation data for predictions of sea level rise that would impact coastal communities around the world.

The researchers made their discovery by comparing ice-penetrating radar records of Thwaites Glacier with modern data. The results appear in the journal Proceedings of the National Academy of Sciences.

“By having this record, we can now see areas where the ice shelf is getting thinnest and could break through,” said paper author Dustin Schroeder, a geophysicist at Stanford University who led efforts to digitize historical data from airborne surveys conducted in the 1970s. “This is a pretty hard-to-get-to area, and we’re really lucky that they happened to fly across this ice shelf.”

Added Paul Cutler, a program director in NSF’s Office of Polar Programs, which funded the research, “This work is tapping into a treasure trove of data that extend the observational timeframe in key areas of Antarctica just as a major effort begins on the International Thwaites Glacier Collaboration. The results couldn’t be more timely.”

The data have been released to an online public archive through Stanford Libraries, enabling other scientists to compare them to modern radar data to better understand long-term changes in ice thickness, features in glaciers, and baseline conditions over 40 years.