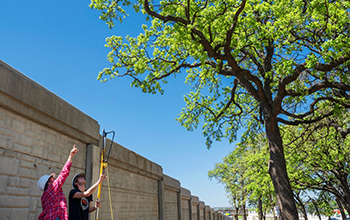 Trees remove black carbon, or soot, from the atmosphere

Researchers at the University of North Texas have found that two oak tree species, post oak and live oak, that are widespread across the U.S. South remove black carbon from the urban atmosphere. The findings may offer a natural way to improve climate and air quality.

The study, led by Alexandra Ponette-González, was conducted in Denton near Dallas-Fort Worth. The scientists measured the amount of black carbon particles captured by post oak and live oak trees, and the amount of the black carbon transported to the ground with falling leaves.

Black carbon, commonly referred to as soot in urban areas, is released directly into the atmosphere as a result of fossil fuel, biofuel and biomass burning; it is the second most important agent contributing to climate change. Black carbon also represents one of the most harmful components of fine particulate matter. When inhaled, black carbon can cause respiratory and cardiovascular problems.

The research is funded by NSF’s Directorate for Social, Behavioral and Economic Sciences.