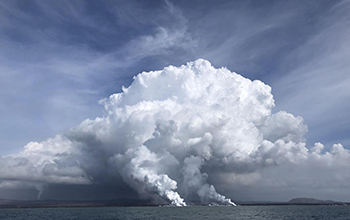 The 2018 Kilauea volcano eruption injected millions of cubic feet of molten lava into nutrient-poor waters off the Big Island of Hawaii. The lava-impacted seawater contained high concentrations of nutrients that stimulated phytoplankton growth, resulting in an extensive plume of microbes.

A study led by researchers at the University of Hawaii at Manoa and University of Southern California and published in Science revealed that this biological response hinged on unexpectedly high concentrations of nitrate, despite the negligible amount of nitrogen in basaltic lava. The researchers determined that nitrate was brought to the ocean surface when heat from the substantial input of lava into the ocean warmed nutrient-rich deep waters and caused them to rise, supplying the sunlit layer with nutrients.

After observing the phytoplankton bloom in satellite images, UH Manoa organized an NSF-supported rapid response oceanographic expedition during the thick of Kilauea’s activity. The team conducted round-the-clock operations near the lava entry region to test water chemistry and the biological response to the dramatic event.

The researchers tested the hypothesis that lava and volcanic dust would stimulate microorganisms that are limited by phosphate or iron, chemicals found in lava.

As it turned out, since there was so much lava in the water, the dissolved iron and phosphate combined into particles, making those nutrients unavailable for microbes. But deep, heated seawater became buoyant and brought up nitrate, which caused the phytoplankton to bloom.

It’s possible, the scientists say, that this mechanism has led to similar ocean fertilization events in the past.

“We’re really pleased to have been able to use our RAPID [rapid response] funding mechanism to get the scientists out there to investigate the bloom while it was occurring,” says Hedy Edmonds, a program director in NSF’s Division of Ocean Sciences, which funded the research.