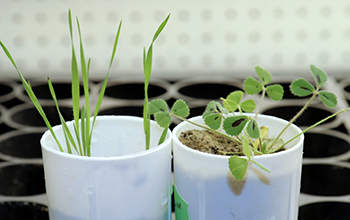 Over-fertilization of agricultural fields is a growing environmental problem. Excess phosphorus from fertilized cropland frequently finds its way into nearby rivers and lakes. The resulting boom of aquatic plant growth can cause oxygen levels in the water to plunge, leading to fish die-offs and other harmful effects.

Researchers at the Boyce Thompson Institute have uncovered the function of a pair of plant genes that could help farmers improve phosphate capture, potentially reducing the environmental harm associated with fertilization.

The work was published in the journal Nature Plants.

AM fungi colonize plant roots, creating an interface where the plant trades fatty acids for phosphate and nitrogen. The fungi also can help plants recover from stressful conditions, such as periods of drought. But feeding the AM fungi with fatty acids is costly, so plants don’t let this colonization go unchecked.

To discover how plants control the amount of fungal colonization, Harrison and colleagues looked at genes that encode short proteins called CLE peptides in the species Medicago truncatula and Brachypodium distachyon.

CLE peptides are involved in cellular development and response to stress, and they are present throughout the plant kingdom, from green algae to flowering plants.

The research was funded by NSF’s Division of Integrative Organismal Systems.