Solutions to urban heat differ between tropical and drier climes 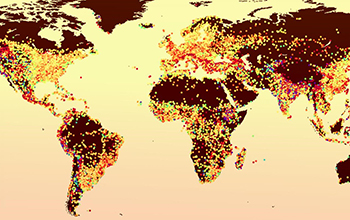 In summer heat, cities may swelter more than nearby suburbs and rural areas. And while the size of this urban heat island effect varies widely among the world’s cities, heat island intensity can largely be explained by a city’s population and precipitation level, researchers reported in a paper in the journal Nature.

Understanding a city’s heat island effect is critical for developing strategies to reduce energy use and stave off dangerously high temperatures, said co-author Elie Bou-Zeid of Princeton University. The analysis suggests that cooling cities by planting more vegetation may be more effective in drier regions than in wetter ones.

One of the model’s benefits is its simplicity. Although it cannot capture details of individual cities, it can give planners a quick and broadly accurate view of possible solutions and their effects on a city’s temperature.

“There are a few cities — New York, London, Baltimore — that are studied intensively, and we don’t know very much about a large range of other cities,” said Bou-Zeid. “With a reduced model that only needs information on precipitation and population, we are hoping to provide a simple framework that can give guidance to any city” in planning heat mitigation efforts.

With urban areas facing the combined effects of global climate change and population growth, the results can provide guidance for the climate-sensitive design of future cities.

“This research suggests that mitigating the effects of the urban heat island is not a one-size-fits-all solution,” said Nick Anderson, a program director in NSF’s Directorate for Geosciences. “Urban planners will need to employ strategies that are based on their climate regime.”