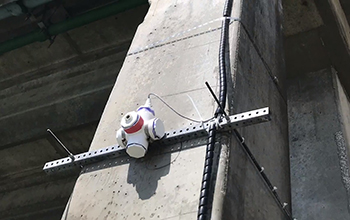 A University of Florida team is starting to gather real-time data on the impact of waves and rising water on bridges during hurricanes. Unlike studies that rely on tests in wave laboratories, this research will use data transmitted directly from bridges during actual storms. With support from NSF, civil engineering Professor Jennifer Bridge and her students are investigating how best to provide early warning to communities when a bridge is in danger of failing due to storm damage. Monitoring coastal bridge health will also help engineers design more reliable bridges in the future. This summer, the team has been deploying the bridge-mounted smart sensor system it developed in the lab. The custom-designed system is the result of extensive research, including adaptive sampling methods to capture wave impacts without overwhelming the system’s memory or power. For now, the team is focused on concrete bridges in Florida’s low-lying coastal areas, like the type of bridges that failed during Hurricane Katrina in 2005. Eventually, they plan to rapidly deploy their system on bridges that are in the path of approaching storms and capture measurements of waves, surge, scour and wind.