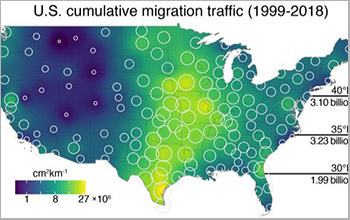 Every year during spring and fall migration, tens of millions of birds take flight at sunset and pass over our heads, unseen in the night sky.

The National Weather Service has recorded the birds’ migratory actions for decades with its constantly scanning weather radars, but the magnitude of information and lack of tools to analyze it has made only limited studies possible.

Now, senior authors Dan Sheldon and Subhransu Maji along with lead author Tsung-Yu Lin, all with the University of Massachusetts Amherst, and colleagues from the Cornell Lab of Ornithology and others unveil their new tool “MistNet” in a study published in Methods in Ecology and Evolution. Sheldon says it’s the “latest and greatest in machine learning” to extract bird data from the radar record and to take advantage of the treasure trove of bird migration information in the decades-long radar data archives. The tool’s name refers to the fine, almost invisible, “mist nets” with which ornithologists capture migratory songbirds.

MistNet can “automate the processing of a massive dataset that has measured bird migration over the continental U.S. for over two decades,” says Sheldon, who says this is a really important advance. Sheldon received a grant from the National Science Foundation’s Biological Sciences Directorate to design and test new mathematical approaches and algorithms for such applications.

MistNet is based on neural networks for images and includes several architecture components tailored to the unique characteristics of radar data.

The team made maps of where and when migration occurred over the past 24 years and animated these to illustrate, for example, “the most intensive migration areas in the continental United States,” Sheldon explains. MistNet also allows researchers to estimate flying velocity and traffic rates of migrating birds.

Sheldon says they hope MistNet will enable a range of science and conservation applications.