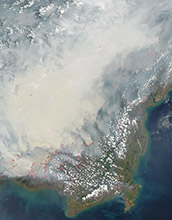 When large areas of carbon-rich soil catch fire, the blaze emits massive amounts of carbon into the atmosphere and creates a thick haze. These blazes can usher in long-term climate impacts that affect the whole planet and affect human health. In 2015, the haze from peatland fires was responsible for more than 100,000 premature deaths in Indonesia, Malaysia and Singapore. Blazes have increased in scale and severity in Asian peatlands over the past 30 years due to land-use change.

For the study, the researchers used satellite data to measure soil moisture in peatlands. To interpret the data, they developed an alternative algorithm and have shown for the first time that analyzing remote-sensing data can reveal soil moisture, which can in turn be used to predict fire risk.

Their analyses show a correlation between drier soil up to 30 days before a fire and a larger burned area.

“If one area has drainage canals and another does not, but you still have the same amount of precipitation, the one with canals still is going to have a much higher risk of fires,” says Dadap. “That’s why we think that inclusion of soil moisture can be an important metric for capturing conditions on the ground.”

Results of the study should lead to improved fire prediction in the future and help with long-term planning for managing peatland fire risk.

The research was supported by NSF’s Directorate for Geosciences.