New study finds U.S. and Canada have lost more than 1 in 4 birds in past 50 years 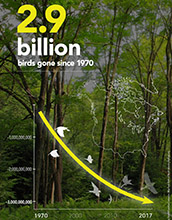 Since 1970, bird populations in the U.S. and Canada have declined by 29%, or almost 3 billion birds, signaling a widespread ecological crisis, a study published in the journal Science reveals. The results show tremendous losses across diverse groups of birds and habitats — from iconic songbirds such as meadowlarks to long-distance migrants like swallows, and backyard birds, including sparrows.

“Multiple, independent lines of evidence show a massive reduction in the abundance of birds,” said Ken Rosenberg, the study’s lead author and a senior scientist at the Cornell Lab of Ornithology. “We expected to see continuing declines of threatened species. But for the first time, the results also showed pervasive losses among common birds across all habitats, including backyard birds.”

“This study shows that small changes over a long period of time can have unnoticed but huge impacts,” said Doug Levey, a program director in NSF’s Division of Environmental Biology, which funded the research. “If you go outside pretty much anywhere, you can easily see birds. That gives the impression that they are common, that there isn’t a problem. These authors clearly show that there is a concern and that it’s been slowly growing for a long time.”

The research was also funded by NSF’s Division of Biological Infrastructure.